We repeat, no war but the class war! 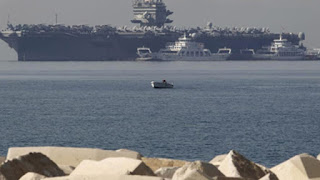 This weekend, Leicester ACG members were asked to speak at a No War But The Class War meeting, hosted by Birmingham Revolutionary Anarchist Group (RAG). Despite it being a Saturday evening, it was a packed meeting, with a good number of RAG members, ACG people, comrades from the Communist Workers' Organisation (CWO), Midlands Discussion Forum and others completely new to anarchist communist politics.

No War But The Class War is an informal coalition of different groups who take a revolutionary internationalist position and view war as part and parcel of the capitalist system. The only way to stop wars is to fight the system that causes wars. Rather than call on governments to stop engaging in slaughter, we see the need for militant sections of the working class to undermine the bosses' war effort. The following info is from the national ACG website.

On such example is when the Saudi ship Bahri Yanbu was recently halted by dockworkers in the Italian port of Genoa.


The ship had previously picked up weapons for the war in Yemen from Antwerp, Belgium, but at Le Havre, France, it was prevented from picking up more arms for the Saudi military after a legal challenge by protesters from a human rights group. Later in Genoa, dock workers, with support from local protesters, took direct action and refused to load generators, saying in a statement, “We will not be complicit in what is happening in Yemen” and they also made the call to “open the port to migrants and close it to arms”.

While we are pleased that the legal challenge in Le Havre successfully prevented the ship from being loaded, we should also remember that the ruling class courts are rarely on the side of justice and the only sure way to prevent mass murder in this and other wars is when workers take direct action and physically prevent or sabotage the ruling class war effort.

This is the true spirit of anti-militarism and working class internationalism and the ACG applauds the dockworkers and their supporters in Genoa. We can only hope that this type of intervention sets an example to other workers also in a position to halt the bosses’ war machine.

At the moment, more war clouds are gathering as the US and UK gear up for conflict with Iran.


Recently President Trump has said that he was capable of wiping out 10 million people in Afghanistan in a week as a solution to destroying the Taliban but said that he would not use this option. Nevertheless this is still a threat ready to be actioned if necessary. This is not the first time Trump has made such threats. In 2017 he threatened “fire and fury like the world has never seen” against North Korea. This might be interpreted as idle bellicose threats to please his voting base and as examples of his brinkmanship in order to obtain deals, but it should be remembered that Trump has ordered a $1 trillion updating of the American nuclear arsenal and has pulled the USA out of the Intermediate Range Nuclear Forces Treaty with Russia.

Equally disturbing is the Trump administration’s policies towards Iran. In June Trump was ready to unleash US warplanes against the theocratic regime in Teheran, but then backed down, afraid that the conflict thus unleashed would destabilise all of the Middle East. Trump has increased sanctions against Iran, and pulled out of the international nuclear deal with Iran, in the process strengthening the grip of the hard line factions in the Iran regime, and bringing hardship to the mass of the Iranian population. Incidentally the US is updating the American arsenal in violation of the Nuclear Non Proliferation Treaty, that being the stick they beat Iran with!

Through the use of sanctions the US hopes to bring down the Iran regime by 2020, thus boosting Trump for a second term in that election year. On the other hand, the theocratic regime in Iran is using the situation to fan nationalist fervour, and to thwart modernising elements within the establishment and grassroots opposition, fairly recently manifested in large demonstrations and industrial unrest.

Iran took advantage of the war in Syria and the emergence of ISIS to increase its influence in the Middle East, in alliance with both the Assad regime in Syria and its fellow Shiite co-religionists in Hezbollah in Lebanon and in Iraqi militias. Its own imperialist policies have been strengthened, and this has affrighted both the US and its allies in Israel and Saudi Arabia.For its part China, involved in a trade war with the US, has stated that it will continue to trade with Iran. Russia too has re-asserted its own imperialist interests in the region

We don’t take sides in this conflict. We support neither Washington nor Teheran. We support the working class internationally, whether in the USA or Iran against the regimes there, and we look towards mass movements against military mobilisation and the drive to war throughout the world.