From our recent “Nation or Class” discussion 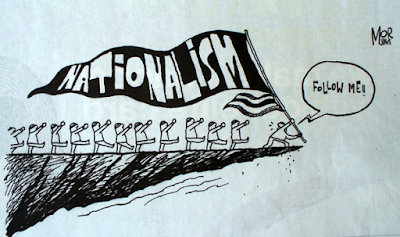 The idea of class has been around in one form or another throughout history (and pre-history) and Marx described history itself as the history of class struggles: workers/boss class under capitalism, lords/serfs under feudalism or slaves/masters under slave societies.

The idea of the nation, on the other hand, is a relatively recent construct, going back a couple of hundred years to the rise of capitalism and the industrial revolution. The idea of a nation state is a construct of capitalism itself, the ideal geographical unit for managing capital and controlling workers within a specific region. This is how the nation state developed over the last 200 years – as the ideal form of social organisation for rapid technological change, mass production, automation, modernisation and increasing urbanisation that resulted from the industrial revolution. Before capitalism, the idea of nation made little sense and people were far more likely to owe their allegiance to their feudal lord, tribe, family, god or monarch rather than to a “nation”. Now, though, the idea of the nation is everywhere, seen by many as a natural state of affairs and sometimes portrayed by nationalists as ever present, going back to the beginnings of history .

Today, in this period of global capitalism, the nation and the nation state as a social entity still serve capitalism well. But for us anarchist communists, just as capitalism is incompatible with socialism, the idea of the nation, nation states or any form of nationalism is also incompatible with any meaningful idea of socialism, communism, anarchism. We accept that history is the history of class struggle in various forms and history does not stop now that the world is divided into nations (nations that still continuously change, divide, enlarge, swap allegiance). And if real socialism entails seizing the means of production from the ruling class and abolishing class society and replacing it with a communist society based on “from each according to ability to each according to need”, then to see any kind of commonality with the ruling class makes no sense.

As we often say, the working class has no country. In fact, we have far more in common with workers in Poland, China, Johannesburg, Mumbai or Rio de Janeiro than we do with people like Richard Branson or Alan Sugar, just because they happen to come from the same islands as us. Or, in Alan Sugar’s case, happen to be the archetypal “working class boy made good” (and became an enemy of the working class, is what they don’t usually mention).

Just as capitalism and its ruling class is international, so the working class is also international. For us then, revolutionary working class internationalism is vital if we are to ever get anywhere as a class and one day defeat the international ruling class and abolish the capitalist system. Any kind of unity between workers and bosses, rulers and ruled, order givers and order takers, exploiters and exploited is a contradiction. This unity includes “national liberation struggles” in which the (neo) colonialized workers and peasants unite with their native oppressor against a foreign oppressor or imperialist power.

The idea of uniting the oppressed with their oppressors in “the national interest” was unsuccessfully attempted by Mussolini’s Fascist corporate state. Also, Nationalism has been a constant part of social democracy, back to the days of the Trade Unions and the Labour Party acted as prime recruiting sergeant for the carnage of World War 1 (all in the national and patriotic interest, of course); and the collapse of the Second International, when the respective socialist parties lined up behind their own ruling classes in that inter-imperialist “war to end all wars”. Since it was formed, the Labour Party in and out of government has been consistently every bit as nationalistic (and war-mongering) as its Conservative/Liberal opposite numbers (possibly more so under the Blair government). The Corbyn led party of today is every bit as supportive of the national interest - which is always, by definition, the ruling class interest.

In these times of neo-liberal global capitalism and the existence of powerful multi-national corporations, which have more economic clout than many nation states, the concept of the nation is still valuable as a way of carving up the world, dividing and ruling… but also possibly because workers are far less likely to pledge allegiance to “the company” than they are “the nation” or some vague notion of patriotism.

More cultural aspects of modern life, work, social organisation, education, sport, festivals, all reinforce, in one way or another, patriotic and nationalistic ideals. So, a red or a red and black flag at a sporting event would be seen as overtly political, while a union jack or other national flag would not. Come October and November (all year round for some), the wearing of the red poppy to commemorate the 1918 Armistice has become compulsory for anyone being interviewed on TV or for footballers at all levels kicking a ball about in public. Failure to "wear your poppy with pride" may have repercussions.

The Left, including sections of the anarchist movement, still clings to its stance of supporting national liberation struggles. And while it is right to be supportive of those who are exploited or oppressed by a colonial or neo-colonial force and who resist that oppression, when that support is for what is clearly a national, cross-class movement, then we will criticise this.

It is not so long ago when slogans such as “we are all Hamas” were popular on the left in support of a range of particularly vile, often anti-Semitic and religious fundamentalist “anti-imperialist” factions against the Zionist regime in Israel. Further back, elements on the UK Trotskyist left (and to their shame, the Anarchist Workers’ Group) were calling for support for Saddam Hussein in Iraq against the imperialist bloc – much to the bemusement of Iraqi communist and anarcho-communist refugees in Britain who had fled the terror of Saddam’s ruling Ba’ath Arab National Socialist Party. Going back even further, UK Trotskyist groups (among others) were vocal in uncritically supporting the Viet Cong/North Vietnamese goverment, doing so in the awareness that the Viet Cong/North Vietnamese Army was, at the time, engaging in pogroms against… Vietnamese Trotskyists.  Now, the left, including many who would call themselves anarchists, are offering increasingly uncritical support for the PYD/YPG – Syrian offshoot of the nationalist PKK in Turkey. Clearly, lessons have not been learnt.

Interestingly, another more recent phenomena on the left seems to be of a kind of working class identity politics that has always been there but which is now developing a distinctly national flavour. Most significant perhaps is the Patria Socialista organisation in Italy. For such groups, the working class clearly does have a country (Italy, in their case). Fortunately, there doesn’t seem to be any such grouping at present in the UK, but such a stance is not completely alien to some individuals on the UK left, so time will tell. For us though, we’re sticking with the old “workers of all countries unite” motto, revolutionary internationalism, and when faced with inter-imperialist war, we’ll carry on with “no war but the class war” thank you very much.

But all that said, this gives us an enormous challenge. It’s one thing to disagree with the national liberation politics of various elements on the left but, given the depth of nationalism that exists within the broader working class, the question is how to undermine nationalism, patriotism, national identity and national unity in the wider class?